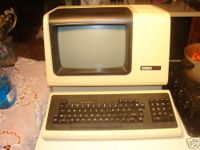 There are some VT100 terminal simulators that model the hardware and run the original firmware:

This article is not as complete coverage of the topic as it could be. You can help by expanding it.
Retrieved from "https://gunkies.org/w/index.php?title=VT100&oldid=23591"
Categories: