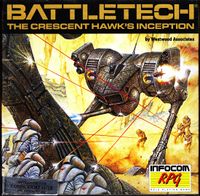 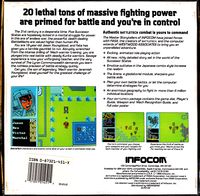 Back of The Crescent Hawk's Inception's box

"The 31st century is a desperate time. Five Successor States are hopelessly locked in a mortal struggle for power. In this era of endless war, the powerful, death-dealing BattleMechs are valued higher than human life. You are 18-year-old Jason Youngblood, and fate has given you a terrible gauntlet to run. Abruptly wrenched from the intense drilling of 'Mech warrior training, you are plunged into real battle with deadly Kurita warriors. Savage experience is now your unforgiving teacher, and the very survival of The Lyran Commonwealth demands you learn the ruthless precision of battle strategy quickly."

This was more of an Infocom in name only game.

Ports existed for the: