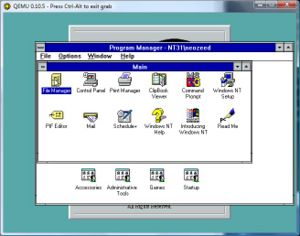 Windows NT 3.1 will install, however it is incompatible with IDE CD-ROM's. This is simply because they did not exist at the time. So you would have to follow the network installation guide. You will also want the AMD Pcnet driver, which is vastly better then the old legacy NE2000.

When NT 3.1 was released pentium CPU's were still beta, and the cpuid thing had not been finalized enough in the install script. So as a precaution we will need to flag the 486 cpu type.

And we'll be into the GUI phase of the install. Since we've got an AMD PCnet driver in the floppy drive we can do the network setup. Remember the AMDPcnet will need its driver installed from "A:\WINNT" ... Also you'll want to load it for TCP/IP, drop the NetBEUI, and configure the TCP/IP as follows:

The install will probably want to format your pcnet disk as an emergency disk, it doesn't matter at this point, and worst case you can always re extract your driver disk if you reinstall.

Logging on for the first time

This is a little tricky on Qemu, as you have to do the following to simulate a CAD

And now you should have the logon prompt.

You may want to setup an autologon via the registry. You can find more information via kb97597.

16 bit versions of Netscape *WILL* run on NT 3.1! There is a nice little cache here:

If you have access to Visual C++ 1.1 or the Windows NT 3.1 SDK you'll be in luck as you can rebuild a few things. In the transition from 3.1 to 3.5 the executable format changed.. You'll find that plenty of cli utilities will NOT run on 3.1.

You may also want to grab a copy of the Windows NT 3.1 resource kit here: