Multics (Multiplexed Information and Computing Service - although it is never spelled in capitals) was an early time-sharing operating system which has influenced every operating system created since; especially via UNIX (the name of which is a play on 'Multics'), which was created by Bell Labs personnel who had worked on Multics, after Bell Labs pulled out of the Multics project.

Multics was intended as an information utility; i.e. a service to which those who wanted information processing would connect, much as people connect to the electric grid for power.

This dictated a number of Multics' features, including the modular structure of the hardware (with multiple CPUs and main memory banks, fully interconnected, and with the ability to take individual units out of service for maintenance, or to simply add additional units as demand increased over time); extremely robust security (so that individual users in a facility open to all comers would be protected from each other), etc.

In addition to the modular hardware, and robust security, Multics had a number of other major technical features, some commonplace now (and some still not too common - alas), but major advances when it was first designed (in 1965). They include:

The single-level store architecture of Multics was particularly significant: it discarded the clear distinction between files (replaced by segments in Multics) and process memory. The memory of a process consisted solely of segments that were mapped into its address space. To read or write to them, the process simply used normal instructions; the operating system took care of making sure that all the modifications were saved to secondary storage (disk).

In modern UNIX terminology, it was as if every file were 'mmap()'ed; however, in Multics there was no concept of process memory, separate from the memory used to hold mapped-in files: all memory in the system was part of some segment, which appeared in the file system; this included the temporary scratch memory of the process, such as its kernel stack, etc.

Multics also implemented virtual memory, which was very new at that time (only a handful of other systems implemented it at that point); but this was not a new idea with Multics.

The segmentation and paging in Multics are often discussed together, but it is important to realize that they were not fundamentally connected; one could theoretically have an SLS system which did not page. Paging was added as well for practical reasons.

Multics also made popular the now-common technique of having separate per-process stacks in the kernel; this was apparently first seen in the Burroughs B5000, but was not well known.

This is an important kernel structuring advance since it greatly simplifies code; if a process discovers, somewhere deep inside a subroutine call stack that it needs to wait for an event, it can simply do so right there, instead of having to unwind its way out, and then return later when the waited-for event has happened.

The entire system was written almost entirely in higher-level language (PL/I) - which was quite rare at the time; the Burroughs B5000 had an OS written in ALGOL, but this was the only previous system to do so. 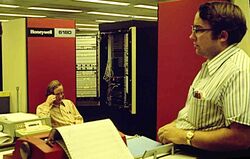 Multics ran only on special hardware, which provided hardware support for its single-level store architecture.

It initially ran on the GE 645, a modified version of the GE 635. After GE was bought by Honeywell, a number of models of the Honeywell 6000 series systems were produced to run Multics on.

Multics is dead. There are no systems running it today (the last one was shut down in 2000).

There is however now a working SIMH-based emulator for the Multics DPS-8/M hardware, and with most of the source code still extant, it is now possible to experience the Multics computing environment.

Porting Multics to alternative hardware would be a worse-than-Herculean task: the design is not well-suited for porting. It used specialized hardware built especially for it, which had many features which do not have exact analogues on any other platform today. In addition, the word length of the machine (18-bit half-words) is explicitly included in many variable declarations in every source module.

Even if that could be overcome, Multics was written in PL/I. There are no PL/I compilers available other than commercial ones aimed at large enterprise systems, and which aren't getting any cheaper. The lack of a free Unixland PL/I compiler inhibits any porting task.