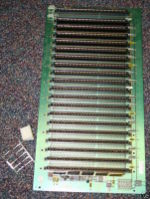 The S-100 bus was designed for 8080 and 8085 but mainly used in many Z80 systems. Being well defined it allowed many manufacturers to produce boards and cases for it, which made manufacture and expansion of a system very easy. Most used CP/M as the operating system on them.

S-100 is short for Standard 100, according to an advertisement by Cromemco on page 2 in the November 1976 issue of BYTE magazine. This was also possibly the first public reference to S-100. Before that it had been known first as the Altair bus, later as the Altair/IMSAI bus, but after a third vendor was added to the list the industry (in reality the competitors to those vendors) decided on a generic term so that they wouldn't have to refer to other companies in their own product advertisements. As the bus used 100 pins it was called Standard 100, or S-100.

A slightly faster and expanded S-100 variant was made into an IEEE standard, IEEE-696, and available as a draft since 1978. First published in non-draft form in the July 1979 issue of COMPUTER Magazine (an IEEE Computer Society publication). It was however not approved by the IEEE 696 committee until late 1982, or early 1983, so the standard is called IEEE-696-1983. IEEE stopped support of the standard in June 1994.

Some of the noteworthy differences between the original Altair/IMSAI bus and the variant of S-100 that became IEEE-696-1983 are listed below. NB: This is far from complete.

This article is not as complete coverage of the topic as it could be. You can help by expanding it.
Retrieved from "https://gunkies.org/w/index.php?title=S-100&oldid=18306"
Category: