Microsoft Windows Premiere Edition is a preliminary release of the Microsoft Windows 1.0 operating environment, which shipped to testers in July 1985 to provide an early look at the Windows product, before the final product was finished and ready to be shipped. The final release was Windows 1.01.

Quoting Tandy Trower (Microsoft Windows 1.0 product manager): "But by the early summer of 1985, we were still not close to being done, so Steve declared we should release a preliminary release that I dubbed the "Premiere Edition", which we provided to key application vendors, analysts, and members of the press for feedback and in partial fulfillment of Ballmer’s promise to ship the product that summer." Source: [1]

According to Trower, the memory management code of the operating system needed to be rewritten at a later point in development:

"Then just at the point I was starting to feel more optimistic about wrapping things up the architect of the memory management code told me he found a critical defect in its design and would need to re-write it, basically rendering all testing to date useless. I pleaded with him to find an easier way, but after a thorough discussion there was no option other than to let him proceed and restart the testing process."

NOTE to users: A properly preserved and fully original copy of this release is available on this site as a "BetaArchive exclusive". See here for details..

A user named trueyanksfan owns a copy of the original floppy disk set of this release and also provided pictures (shown here on the right) on the forum. Only the fourth disk was usable though, since the remaining three disks were since overwritten.

Shown below is a copy of the fourth disk, with updated files from between October 23rd and October 28th, 1985, which were likely provided to testers for further evaluation prior to the product's release.

A picture of the floppy disk set of this and a screenshot of the Windows logo screen were provided by a user named Alias, who eventually provided the site with a well preserved and fully original copy, currently provided to visitors as a BetaArchive exclusive.. 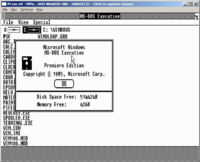