The 16-bit ISA slots added an additional plug on the board for the extra address pins & IRQ pins, while keeping the existing 8 bit ISA slot in place. Thus the AT could use 8bit cards without modification. The AT also ran its ISA bus at 6MHz, vs the PC/XT's 4.77MHz making the AT all around faster.

Until the rise of the Pentium II CPU, the IBM AT motherboard was the standard size for clone motherboards with 286 and greater CPUs. 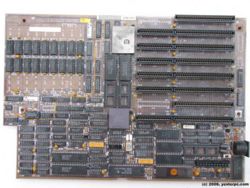 The IBM AT unlike the IBM XT is fully 16 bit, with a 16-bit data bus, 24-bit address bus, and 16-bit ISA expansion bus. IBM had also promised along with the AT that it would support the next generation of operating systems, OS/2. The AT was also able to run Xenix, along with a special protected mode version of Xenix.

All BIOS's with computers with a 286 or greater CPU are compatible with the IBM AT.

The IBM AT shipped with a WD-1002 controller, that supported MFM hard disks, but unlike other controllers, the control code was in the IBM AT, and the drive parameter table was burned into the BIOS, and the selection was saved into the non volatile RAM. The AT also required a special diskette to set up the NVRAM, while clones typically didn't include the ROM BASIC, and instead included a setup & diagnostic program in ROM.

Also in this model, was the introduction of high density diskettes, starting with the 5 1/4" 1.2MB drive. Many AT specific things shipped on high density disks to prevent PC/XT users from using these programs. OS/2 was one such program, along with Microsoft C 5.1 where the OS/2 components were on high density disks, while the rest of the compiler was on low density disks. I don't remember exactly how you got a 3 1/2" disk on an original AT, if it required a ROM update, or a 3rd party controller, or both.

The IBM AT was later supplanted by the IBM PS/2 line of computers.

This article is not as complete coverage of the topic as it could be. You can help by expanding it.
Retrieved from "http://gunkies.org/w/index.php?title=IBM_AT&oldid=18186"
Category: