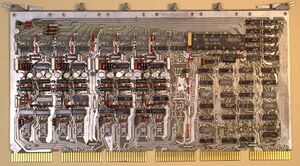 G110 control logic board; the blank area in the center right holds the extra components for the parity bits in the G109 variant

The MM11-L core memory was a popular, and common, 16 Kbyte core main memory unit for the early PDP-11 UNIBUS machines. An MM11-L was composed of a three board set:

The MM11-L required a custom backplane, although some CPU's (e.g. the PDP-11/05) had processor backplanes wired to hold one or more MM11-L sets, in addition to the CPU. 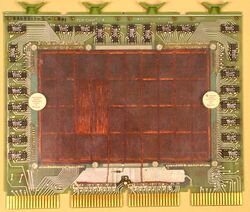 The manual indicates that an 'MF11-LP backplane' was required, but it is not stated if this version had a different PCB, or if the non-parity version simply had a jumper, like the MM11-U core memory. After some investigation, apparently there were two versions of the backplane, the early one (DEC part number 54-09959) which cannot run parity, and a later one (part number 54-10331) which can. An example of the later backplane had the same jumper as that called for for the MM11-U, from pin 1BU1 to 2BU1; this jumper should not be present for parity memory.

The parity controller, if present, can only be placed in slot 6. The backplane connects together all the BU1 SSYN pins on the interior slots (2-8), effectively an 'internal' SSYN; the jumper connects together that line, and the main UNIBUS SSYN. The G109/G110 modules drive that 'internal' SSYN; hence the need to install the jumper for non-parity memory. When parity is enabled, the parity controller drives the bus SSYN via pin BV2 in its slot, which is directly connected to bus SSYN via a trace; the controller uses the 'internal' SSYN as input.

Note that therefore parity and non-parity memory cannot be mixed on the same backplane. There is also no provision for use of the M7259 parity controller in the PDP-11/05 backplanes which support the MM11-L.

(One could probably easily ECO the earlier version backplane to support parity, since the SSYN trace is accessible: cut the trace at 1BU1 and 9BU1, and add the needed wire-wrap lines.)

The board organization in the MM11-L backplanes is not given in the manual; that for the MF11-L is:

The first MM11-L set goes in slots 1/2/3; as MM11-L sets were added, they were installed in slot numerical order. (The location of the parity controller is the only un-used dual slot in a full MF11-L.)