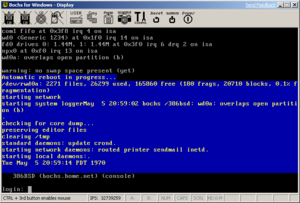 386 BSD is difficult to install on real hardware, and emulated hardware is difficult as well. As of now the only known emulator that can install 386 BSD is Bochs 2.4. I'm currently having some issues with it's disktab structure as it keeps placing the swap partition starting at 0 and overwriting itself. The error message I keep on getting is:

the majority of the games are hiding in /usr/othersrc/public ...

Honestly I haven't used 386 BSD 0.0 to do anything, except load patchkits.