A DEC Power Line Monitor (alternatively called a Power Control Board, Regulator Board and +15V DC regulator in various DEC documents and maintenance prints) is a small board used in the H742/H7420 and H765 power supplies to produce a modest amount of +15V DC power, along with a line time clock signal, and AC and DC 'power OK' signals. 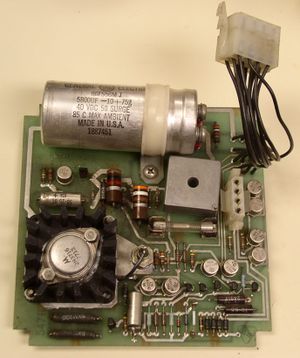 There were also significant differences between the two in how they interfaced to the rest of the system; the main difference beween the two was that the former produced outputs on a short pigtail which ran into a 12-pin Mate-n-Lok connector (female pins), whereas the latter has an edge connector which plugs into a connector at one end of a power harness. 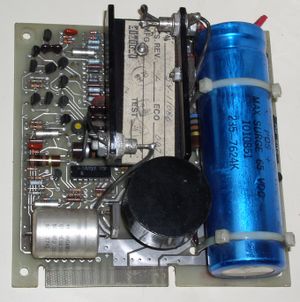 Other uses (such as in the MJ11 and MK11 memory systems) use different harnesses.

The former version of the board also brings its AC input in on a 4-pin Mate-n-Lok connector secured to the board; the latter uses the two right-most contacts (in the image to the side); these are usually broken out to a separate connector in the harness (see, for example, the 7010138 harness used in the standard BA11-K.

Some components on the 5411086 board (such as the main bridge rectifier) are not protected by an on-board fuse; if they fail 'closed', since AC to that board enters through contacts on the edge connector, those contacts may be damaged.

This is not an issue in the H7420, which has a fuse in the power harness feeding the card; the H765 has no such fuse, and the issue has been seen in the field with these units.

It is recommended that an in-line fuse be added to the supply harness in these units. Alternatively, a separate AC supply pigtail, holding an in-line fuse, can be installed, to avoid routing AC through the edge connector at all; this approach has the additional advantage of not needing a change to the original harness in the unit.