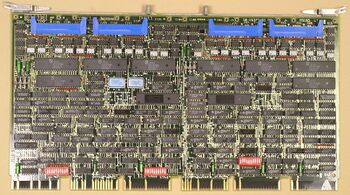 The reasons for the replacement of the DH11 are not known, but likely the major one was cost: the DH11 consisted of an entire double system unit backplane, containing multiple cards; the DHU11 was a single card. It had some minor improvements over the DH11 (including a fix for its silo problem), but they seem not significant enough by themselves to warrant its replacement. They included:

Physically, the DHV11 consisted of a single hex card, the M3105, which plugged into a MUD slot. It connected to a pair of H3029 distribution panels (8 lines each) via BC05L flat cables, two per distribution panel; the BC05L connects to a 40-pin Berg header on each end. The H3029 contains eight male DB-25 connectors (DB-25P).

The registers in the DHU11 are somewhat different from those in the DH11:

Registers marked with a '*' are byte width; the others are all word-width. The RBUF and RXT share an address, as do the TFD and TFS: the RBUF is read only, and the RXT is write only; the TFD is write only, and the TFS and STAT are read only. The LPR through TBCT are replicated, with one for each line in the device; the 'Line' field in the CSR indicates which one is currently available.