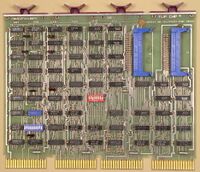 Connection to the user's device is via a pair of 40-pin Berg connectors; each is controlled by a separate set of registers (identical for the two connectors).