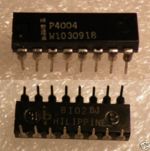 The Intel 4004 microprocessor resulted when the Japanese company Busicom contracted Intel in 1969 to create a chip set for a printer-calculator.

Busicom eventually permitted Intel to use the chipset design for non-calculator applications (the year this happened was 1971, according to sources). The processor chip was called the 4004 and sold for $200. This was the first commercially available microprocessor (although not Intel's first microprocessor design; work had started on what became the Intel 8008 first).. It was designed by Federico Faggin, who in 1974 left Intel and started Zilog.

The 4004 (see picture) came in a 16-pin DIP[1] and had some limitations when compared to later microprocessors. It could only execute code out of erasable ROM, RAM was only used for storing data, and this complicated the life of the programmer somewhat. The chip also needed a lot of support logic.

Data and address information were multiplexed on a 4-bit bus. The need to multiplex the buses was part of the constraints caused by using a 16-pin DIP (40-pin DIPs were already in use by competitors at the time), enforced by Intel's management. Multiplexing reduced the instruction execution speed that could have been achieved, for example.

The 4004 was only the processor part of the chip set produced for Busicom. The original setup was known as 'The 4000 Family', aka 'Busicom Chip Set', aka 'MCS-4 Chip Set' and consisted of:

[1]Note that the BYTE article incorrectly states that the chip came in an 18-pin DIP.