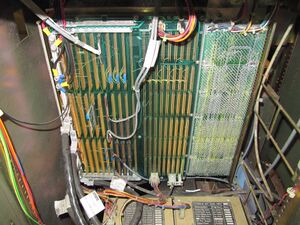 /750 backplane from behind, showing the slots occupied by the MS750 in the centre

The Memory Controller Module connects to the /750's CPU/Memory Interconnect bus, and also to an internal memory bus - which does not seem to have a formal name - which runs to the memory array modules' slots.

There were three different Memory Controller Modules for the MS750:

The earlier modules are also used with the MK11 memory system of the PDP-11/70.