Difference between revisions of "Maxc" 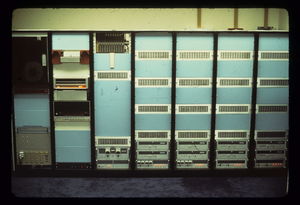 In addition to a PDP-10-compatible mode, MAXC microcode also implemented a Byte Lisp mode with 9-bit instructions specially tailored for LISP. The INTERLISP compiler and runtime has support for this instruction set under a MAXC condition, and the MAXC monitor has special JSYS calls to facilitate Byte Lisp code.

They ran the TENEX operating system; to do this, Maxc implemented virtual memory mechanisms comparable to those added to the KA10 by BBN, including a 1024x18 bit mapping memory.