Difference between revisions of "PDP-8/S"

The PDP-8/S was DEC's attempt to produce a 'cheaper' PDP-8. It was a serial implementation, which reduced the part count somewhat, but resulted in an incredibly slow machine, compared to the rest of the line. It was soon discontinued.

The PDP-8 was constructed with discrete transistors, packaged into DEC's FLIP CHIP technology. It could perform an addition to the accumulator in 64 μseconds. It had parity on the main memory as standard, not optional. 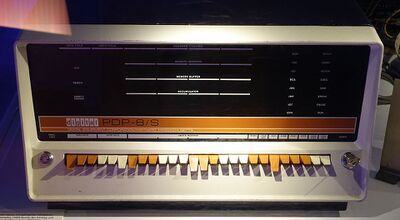 PDP-8/S in the Tekniska Museet in Stockholm, Sweden