The RK11-C is the earliest known version of the RK11 disk controller. (Nothing is known of the -A and -B, if they ever existed as products, although see here for more about the RK11-C's predecessor.)

Like many of the earlier large peripheral controllers for the PDP-11, it was a large custom wire-wrapped backplane which bolted into the front or back of a 19 inch rack, such as an H960; into it plugged about 40 small M-Series FLIP CHIPs.

The backplane is wired for connection to a standard DEC indicator panel, but no inlay for such has even been sighted, although the RK11-C Engineering Drawings allow one to work out exactly what such an inlay would have looked like. It does however appear than the earlier version did have such an indicator panel. 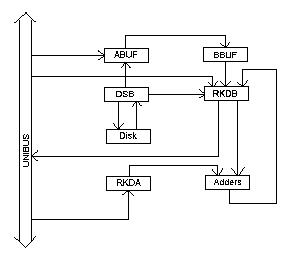 There is also a rare variant of the RK11-C, the 'Double Buffer' RK11-C. It adds two 16-bit buffer registers (ABUF and BBUF), which are chained in an alternate data path between the UNIBUS and RKDB buffer register.

The motivation is not explicitly known (no documentation other than the engineering drawings is now extant), but it likely prevented under-run errors when there was considerable competing UNIBUS DMA traffic.

The engineering drawings for the Double Buffer RK11-C are very similar to those of the standard RK11-C. The differences are listed below.

The following table gives a listing of the FLIP CHIPs used in the RK11-C and the Double-Buffered RK11-C. (Drawn from module utilization drawings, confirmed in module count charts.)

The following table gives the FLIP CHIP locations in the backplane for the RK11-C and the Double-Buffered RK11-C (added FLIP CHIPs for the latter are in italics). The Flip Chip module utilization chart is as follows (* = Connector):