The RL01 and RL02 are single platter, removable pack disk drives, introduced in 1976 and 1978 respectively, by DEC. They used an IBM 5440 type pack, as used on the IBM System/3. Up to 4 drives may be attached to a single controller; the drives are connected serially. The total length of the string may not exceed 100 feet.

The RL01 is a 5MiB drive, and the RL02 is 10MiB; the latter is a high-density version, with twice as many tracks per surface, but otherwise mostly identical.

To keep the heads properly aligned on the tracks, it used a servo system driven by servo data written on the pack (along with sector headers) at the factory. Packs cannnot be low-level re-formatted in the field, and are not compatible with both drive types (although both types are physically identical).

An RL02 drive; note the label

Early versions of the drives included a set of brushes that swing out over the platter on start-up; these were deleted in later versions.

The UNIBUS controller is the RL11, a single hex card. The QBUS controllers are the RLV11 and RLV12; the former consists of two quad cards, and needs a QBUS backplane with CD interconnect; the latter is a single quad card, and is also the Q22 version. The OMNIBUS controller (for the PDP-8) is the RL8A. 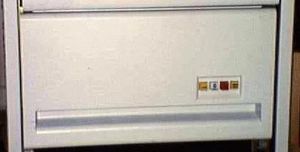 An RL01 drive; note no label

To get from the controller to the first drive of the string, one of two setups can be used.

A BC80M-xx cable has a Berg connector at one end which plugs into the controller, and one of the latching connectors to connect to a drive at the other. Alternatively, a BC06R-xx flat cable goes from the controller to a transition adapter (part number 70-12415-0-0) in a mounting bracket attached to the rack; a standard cable goes from there to the first drive. (If the flat cable is plugged into the adapter the wrong way around, no damage is done; the 'Fault' lights on the drives on that string come on, is all.)

The drive string must be ended with a terminator on the 'out' port of the last drive, part number 70-12293-0-0 (although the terminators generally have no markings on them). Again, terminators in both plain black plastic, and with silvery metallic coating, have been observed.

The terminators and transition adapters for the RL01/02 and RK06/07 disk drives are the same, and interchangeable. The cables are semi-compatible; RK06/7 cables may be used with the RL01/02, but not the other way around - those for the RK06/07 have additional wires which are not present in the RL01/02 cables.

As is common on older moving-head removable pack drives, the heads are (or should be) mechanically held from moving with a manually-installed restraint when the drive is transported. On the RL01/02, this is a small rectangular plate, held down with a machine screw, which prevents the head from moving out into the pack compartment. To install/remove the restraint, simply loosen the screw (do not remove it, or the plate), and rotate the plate 90 degrees.

The RL01/02 also uses a pair of screws, on the bottom of the drive, to secure the (heavy) drive motor when the drive is being shipped; install these before moving a drive, and make sure to remove them when installing one.

The RL01/02 drives use fairly custom slides (shared with the RA81, among others); they bolt onto the side of the drive (using the thin rail riveted to the drive on the sides to help support the weight), and they are handed (i.e. different on the left and right side).

There seem to be two generations of slides; the part #'s for the newer ones are: 1213686-00 Rev-K1-R and 1213686-00 Rev-K1-L. Older drives have been observed with slides which don't have any visible part #'s; they look almost identical to the later ones, except that the newer ones have two rocking trip levers (one in the middle, and one at one end), and the older ones have only one (the one in the middle).

Opening the drive without power

On RL01/02 drives, the top hinged cover (which must be lifted to insert/remove packs) is held shut with a latch which itself has a solenoid release latch; unless the drive is powered up, the solenoid latch is not released, and the top cannot be opened. (This is a safety feature, to prevent the hinged cover being opened when the pack is still spinning.)

Some later drives have access panels which can be removed to gain to the solenoid. On older ones, one has to loosen the four screws holding down the rear cover on the top of the drive, and lift the front edge where it traps the pins of the hinged cover; this allows the back of the hinged cover to be raised slightly, and therby clear the solenoid latch, allowing the main latch to be operated.

Reinhard Heuberger has created an open source emulator for the RL02 (and RL01) using a Terasic DE0-Nano Altera Cyclone IV FPGA board, extended with necessary interfacing hardware and an SD card slot. The emulator can be used with a real PDP-11, for example.