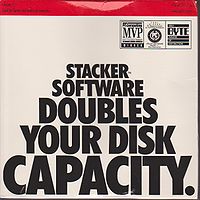 Stacker was a program from STAC electronics that featured the lZS compression algorithm that was known for being pretty fast.

Stacker would create a file on your disk, then present that file as a virtual disk that your programs could run. Stacker could even compress your 'c' drive then swap the virtual D/C at runtime. The big limitation of stacker is that it only dealt with the FAT filesystem, and the largest compressed volume thusly could be 2GB. Stacker was big when hard disks were typically well under a gigabyte, and were very costly to replace, esp in laptops.

There even was a version of Stacker for OS/2, although it still was limited to FAT disks, and the installation required the OS/2 operating system be on a FAT disk.

This article is a stub. You can help by expanding it.
Retrieved from "https://gunkies.org/w/index.php?title=Stacker&oldid=10553"
Categories: