Difference between revisions of "Usenet archive" 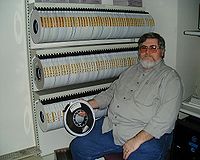 There is an incredible archive here of all the early usenet posts from February 1981 until June of 1991.

I just found out that the UTZOO archives have been destroyed. Only 3rd party mirrors exist. What an incredible loss, of nearly 2 decades of written history. Absolutely tragic.

This article is a stub. You can help by expanding it.
Retrieved from "https://gunkies.org/w/index.php?title=Usenet_archive&oldid=22506"
Category: