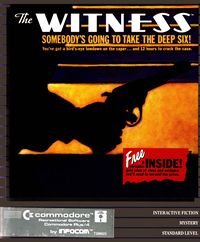 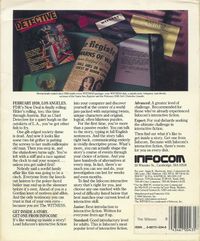 "FEBRUARY 1938, LOS ANGELES. FDR's New Deal is finally rolling. Hitler's rolling, too; this time through Austria. But as Chief Detective for a quiet burgh on the outskirts of L.A., you've got other fish to fry.

One gilt-edged society dame is dead. And now it looks like some two-bit grifter is putting the screws to her multi-millionaire old man. Then you step in and the shakedown turns ugly. You're left with a stiff and a race against the clock to nail your suspect... unless you get nailed first!

Nobody said a sordid familiy affair like this was going to be a cinch. Everyone from the knock-out heiress to the poker-faced butler may end up in the slammer before it's over. Ahead of you is a Gordian knot of motives and alibis. And the only testimony you can trust is that of your own eyes -- because you are The WITNESS."

In Version 13, if a player got into the shower or the broken window, he would become trapped. If you tried to leave, the game would think you needed to get up first, because it thought you were sitting in the chair. Getting up would not work. [NZT] You can "GET A DRINK" anywhere in the game. This is present in all versions. [NZT]