Difference between revisions of "Zork"

A map of Dungeon

Zork is one of the most popular, and ported games for mini and personal computers. Zork was written in MIT (Marc Blanc, Joel Berez and others) in the MDL language. It was VERY popular and was ported to various other langauges and systems. The FORTRAN port by Bob Supnik is perhaps one of the more popular versions.

There is a little confusion as the the name, Zork started out as the original name, but as time went on, it became "Dungeon". However TSR threatened Infocom that Dungeon sounded too much like Dungeons & Dragons, so the name was changed back to Zork.

A better introduction can be found here:

Zork started the genre that would be better known as interactive fiction. You simply type in what you would want to do, and the story unfolds..

The MDL source code is available from the SIMH software site here. Likewise, Bob's port to Fortran is available here. The Fortran version was last updated from 1990.

Various versions can be retrieved from http://ftp.giga.or.at/pub/ifarchive/games/source/

Zork running on ITS

Zork's MDL source on ITS for the PDP-10.

There is a MDL interpreter called Confusion that is capable or running a slightly patched version of the original MDL Zork code.

From the US NEWS & DUNGEON REPORT: 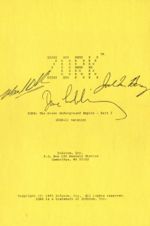 The cover for Zork I on the PDP-11

I've managed to track back some source & binaries for this RT-11 version. Also the fabled manual was recently found, sold and scanned. It's even autographed.

This version can be converted to disk images with putr, which you can then copy to a larger disk and run it. At the moment this is the oldest known runnable version of Zork.

There is also some rx50 disk images, here here dungeon1,dungeon2 & asc are the disks needed for dungeon. This version however is the source code version, Instructions on compiling it can be found in the tutorial Compiling Dungeon on RT-11. Extracting the strings I see this for the history portion:

I've also managed to track back the source to a newer version, and setup some instructions on how to build it with RT-11 in the tutorial aptly named Compiling Dungeon on RT-11.

I came across this looking at old UseNIX software, and oddly enough in the 1987 tape, I found this.. I haven't tried to build it or run it, but it does include source, and in the text files I could extract the following:

So, while this isn't the oldest one, it's got to be more portable....

Zork on the IBM 370 mainframe

Recently I've found an archive of Zork that includes source that runs on CMS for the IBM System/370 mainframe.. I've run it under VM/370.

Zork on the PDP-11 running BSD

This version of Zork contains the following readme, with some information as to the history of Zork on the mini's:

This version is infact the same version that runs on the PDP-11 versions of BSD Unix. What is interesting is that this version uses a PDP/11 emulator to run the above binary. It's also worth noting from the VAX's readme:

Using the save/restore commands will cause the program to crash.

The following is a quick session of the 4.2 BSD version of zork. I think this was the same under all 4.x BSD vax releases.

From what I can find, here is a list of all the platforms: 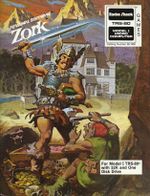 Zork was first available on the TRS-80 requiring 32kb of ram, and a floppy disk drive!

Zork was also available for the i8086 running CP/M, and you can find it here: 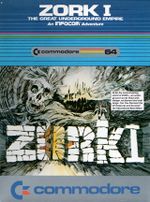 Of the 6502 based micro's the Apple II, Atari 800, and the Commodore 64 both possesed ports of the interpeter required to run Zork.

Commodore OEM'd Zork onto their computer, and they had unique artwork done.

The IBM PC was also able to run Zork, as shipped from Infocom.

The History of Zork can be found here http://www.csd.uwo.ca/Infocom/Articles/NZT/zorkhist.html

The FORTRAN version of zork was interesting as it included a built in debugger. Depending how old they are, the question would be different.

For example some of the earlier ones look like this:

And more on the nature of GDT:

Started as a side project back in the mid 1980's as first decompiling the 8080 version of Zork. Afterwards they reimplemented it in C, and thus were able to run Infocom games on any machine that they could compile on. I have been able to track down version 1.0, which included support for various mini-computers & personal computers of 1987. Version 1.0 is only capable of playing version 3 games. I've been able to get this running on the x68000 platform via emulation. Notes for this port are on my blog. Also I did a port to the cisco 1700 router platform. Again notes are on my blog.

The much later Version 4.01 build of InfoTaskForce includes support for more platforms, and more versions of Infocom games. This also served as the base for later intpreters