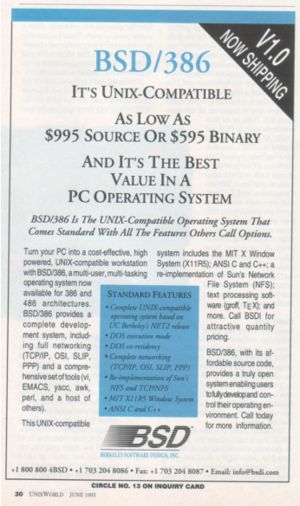 BSD/386 was a commercialized version of 4.3 BSD, and later 4.4 BSD for the i386 & sparc processors. A few notable people from the CSRG helped with the project.

At the time it was one of the cheapest UNIX'en at $500 for a binary license, and $1000 for a source license, but it failed to get big traction, probably because of the rise of Linux and the free BSD's NetBSD and FreeBSD.

I know at some point in the early 1990's this was seen as THE platform for running the Apache Web server, and I've even seen CD's at work that we used to run, but even early upstarts eventually switched out to FreeBSD, as it was cheaper, and the fixes came in quicker.

This article is not as complete coverage of the topic as it could be. You can help by expanding it.
Retrieved from "https://gunkies.org/w/index.php?title=BSD/386&oldid=21954"
Category: