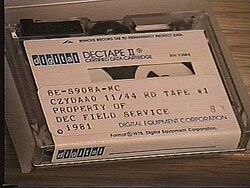 DECtape II was a low-cost, low-performance random access magnetic tape secondary storage system, proprietary to DEC. They were effectively a successor to the earlier DECtape.

They were primarily intended for booting and software distribution (although they could be used for mass storage), so in some sense they were an early alterative to floppy disks.

It used a DC-100A cartridge from 3M, containing 140' of .015" wide tape, on which data was written at 800 bits per inch. The tapes were pre-formatted by DEC to hold 2048 records of 128 bytes each, in two tracks; thus a cartridge could hold 256KB in total. The drive always read and wrote blocks of 4 records, giving the standard 512 byte blocks of DEC mass storage devices.

The only DECtape II drive was the TU58 DECtape II.