IBM never made an 'AT' compatible 386 computer, but instead converted out to the PS/2 line. However almost all vendors didn't want to license the microchannel bus, as they were far more happy with the significantly cheaper royalty setup with licensing the AT boards.

Another 'slightly' interesting thing is that Compaq was able to rush their 386 motherboard, and became the first large OEM with a 386 computer. Apricot Computers also jumped ahead as the first 486 vendor in 1989. The clone market opened up to dozens, if not hundreds of vendors, along with big names like Intel, Commodore etc that jumped in on the ever expanding PC market. 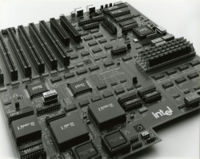 Although the 386DX was a full 32bit chip, most of the early ones were saddled with the IBM AT's 16-bit expansion bus. There were quite a few proprietary buses, before a large group got behind the EISA bus. Later buses included the VL, then finally PCI, although those two were typically for i486 and Pentium computers.

This article is not as complete coverage of the topic as it could be. You can help by expanding it.
Retrieved from "https://gunkies.org/w/index.php?title=IBM_386&oldid=20253"
Category: