The IBM XT, formally the IBM 5160 was an extended version of the first IBM PC, the IBM 5150. It provided extra slots, while removing the adapter for the tape drive. The IBM XT was also sold with a hard disk drive, along with a floppy drive, or as a dual floppy drive system.

Since the 8088 CPU could address 1MB of RAM, the memory map was split in a 640KB for OS & programs, and 384KB for hardware buffers and ROMs. 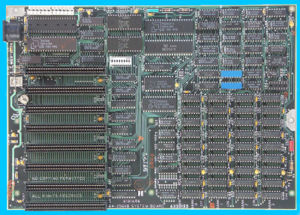 Typically this was the board form factor and design to clone. Although the XT provided eight expansion slots, they were typically filled with extra RAM, a real time clock, parallel, and serial port cards, floppy and hard disk controller cards, and a video card.

The IBM XT was later replaced by the IBM AT.