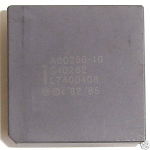 The Intel 80286 (often given as 286 or i286; Intel documentation often refers to the iAPX286, although it is not clear if the latter term refers to complete systems, or just the CPU) was the third generation 8088/8086 CPU. The 286 was noted for being more efficent then the prior parts, so at the same clock speed it was slightly faster.

The 286 also introduced protected mode. In this mode, it had a 24-bit address bus to allow access for up to 16MB of RAM, and a virtual address space of 1GB. There were, however, two major flaws with the 286

The first was that all the memory was (still) divided in 64KB segments. With the ever growing popularity of the Motorola 68K CPU's flat address space, this was a major problem, as it hampered the design & porting of large programs.

The second was that the 286 had no method of switching the CPU from protected mode to real mode. It was Gordon Letwin of Microsoft who found a way, using a triple fault to soft reset the 286 into real mode; however, it could take nearly 1 second, making switching from protected to real not feasible to be done often. However this is what made OS/2 feasible as now it could offer limited MS-DOS compatibility.

The 286 was seen by the software business as being a rather disapointing CPU. Intel listened, and its next chip, the 386, corrected all the issues people had with the 286.

In my opinion the 80286 CPU held the industry back some 10 years, as most people that owned 286 CPU's never had more then 1MB of RAM, and this led to so many things at the time trying to cater to the 286 protected mode, instead of taking advantage of the 386.

This article is not as complete coverage of the topic as it could be. You can help by expanding it.
Retrieved from "https://gunkies.org/w/index.php?title=Intel_80286&oldid=18610"
Category: