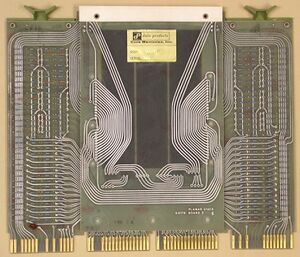 The MM11-E and MM11-F core memories were UNIBUS main memory units; the first UNIBUS memories produced by DEC. They came out with/for the first PDP-11, the PDP-11/20.

They were very similar - both 4K word (8K bytes), and with most of their boards in common. The MM11-F was capable of interleaving (although this capability was then made available to the MM11-E as well); it also had a parity version available, the MM11-FP (which used a 4Kx18 core plane, instead of the 4Kx16 used in the MM11-E and MM11-F).

Both consisted of a quad-width H207 (non-parity) or H210 (parity) core plane board (the H2xx board consisted of a G617 and a G616 Planar Stack boards), along with a number of dual- and single-width cards (all extended-length), plugged into a custom-wired quad system unit backplane. The MM11-F and MM11-FP used the same backplane; only the board set was slightly different.

So the only major difference is the M7290 Control Logic, instead of the M729.

These are the board locations for the MM11-E (as seen from the board side of the backplane):

These are the board locations for the MM11-F and -FP (as seen from the board side of the backplane):