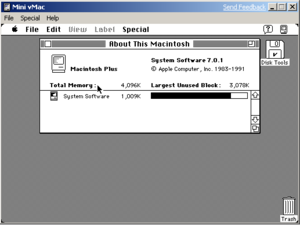 Simply put vMac is a quick & fast Mac Plus emulator. That being said, it will emulate a 68000 CPU with 4 (yes, FOUR) megabytes of RAM. Now you will need a ROM from a plus Macintosh in order to run this. Assuming you have your ROM in a file called vMac.rom you are almost ready to go! Now you need a copy of the operating system. Luckily Apple has made systems prior to 7.6 free, and you can download them below. 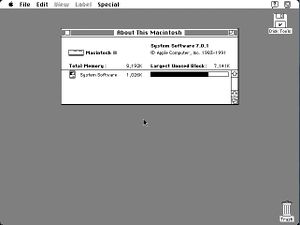 This new version of Mini vMac, will emulate a Mac II with a 68020 and 8MB of ram, and will require a rom file named macII.rom. I've found that System 7 works best, and is available below.

Putting it all together

You will need an operating system. For the Mac Plus, System 6 works great, 7 will run as well, but it's kind of memory intensive for a Mac Plus. For the Mac II you really have no choice but System 7 to run properly.

I’d highly recommend a utility called HFVExplorer. This will let you create a ‘hardfile’ to simulate a hard disk, and allow you to move files you’ve downloaded into your hardfile. You can find a copy here:

Ok with mini vMac, your ROM, a hard disk file & the system 7 boot disk you should have enough to have a booting instance. It should be about that simple.