QuickWin was a porting library] to quickly port MS-DOS style text mode programs into Microsoft Windows. This was more so popular for versions of Windows that lacked a console (Windows 3.0, Windows 3.1).

QuickWin could provide basic stdio functions, however it had no cursor control. 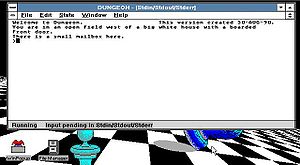 It was largely used as a stopgap measure to get simple programs into Windows, and away from the cluttered DOS Extender market. The tools for QuickWin tended to be significantly cheaper then the DOS Extender tools of the time, and the deployment costs of Windows was cheaper then many extender royalties. Popular languages that included QuickWin functionality was for 16-bit Microsoft Fortran & C.

Windows NT & Windows 95 included console functionality so this library has been relegated to a thing of the past. There is no offical QuickWin library for the Win32 & Win64 environments.

This article is not as complete coverage of the topic as it could be. You can help by expanding it.
Retrieved from "https://gunkies.org/w/index.php?title=QuickWin&oldid=20278"
Category: