The RL11 disk controllers (the original RL11 for the UNIBUS, and the RLV11 and RLV12 for the QBUS) were for the RL01 and RL02 disk drives. (These drives protect the data, and sector headers, with separate CRCs.)

All have a 40-pin Berg connector header holding a flat cable, which runs to a bulkhead-mounted converter from the flat cable to a special inter-drive cable (round in cross-section, with special locking connectors). (If the flat cable is plugged in the wrong way around, nothing is damaged; the drive merely turns on its 'fault' light.)

The cable runs from the converter to the first drive; up to 4 drives can be connected to a single controller, using a bus running from one drive to the next, with a terminator in the last drive of the string. 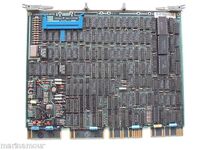 The controller and drive combination can execute 8 different commands:

Implied seeks (i.e. setting the disk address, and then starting a read or write operation, which is intended to happen at that address) are not supported; an explicit seek to the desired cylinder must be performed before the read or write. (This is in part because the Disk Address register is shared between the cylinder move number, during a seek operation, and the starting sector number, during a read or write operation.) Spiral reads and writes (i.e. multi-block reads which start on one track, and overflow to the next) are also not supported; multiple separate read/write commands are needed, with a seek to the next track between each pair.

The RL11 controller includes 4 (5 for the RLV12) read-write registers:

During a 'Get Status' command:

During a 'Read Data' or 'Write Data' command:

During a 'Get Status' command:

During a 'Read Header' command, three successive reads to the Multipurpose Register will return in the first word, on an RL01:

followed by all 0's in the second word, and the header CRC in the third.

Note: This register is present in the RLV12 only.

This bootstrap (which is position-independent object code, so it can be placed anywhere; 04000 is good) will load the block at sector 0 of cylinder 0 of drive 0 into main memory at address 0:

Note that the INIT pulse caused by hitting the front panel's 'Start' button will clear the Bus Address register, so that the loaded block will be placed at location 0; and the Disk Address register, so that sector 0 will be read. If the drive's heads are not on cylinder 0, since a seek on an RL01/02 is relative, a 'Read Header' command would have to be done before a seek could be commanded (or the device driver must remember the current cylinder), and that all would require a fair amount of code. To ensure that the drive is on cylinder 0 for the bootstrap, the drive should be power cycled before starting the bootstrap.