The TU56 DECtape Transport is an enhanced successor to the TU55 DECtape magnetic tape drive. The usual configuration was dual-drive (referred to as 'dual transport'), but a single-drive version, the TU56H, was available. The TU56M (dual) and TU56HM (single) model included 5 G888 Read/Write Amplifier FLIP CHIPs, for use with device controllers which do not include that functionality.

The TU56 contains a small backplane holding a number of FLIP CHIP modules. The module location chart for the TU56 backplane is (starting at the right-hand side, viewed from the board-insertion side): 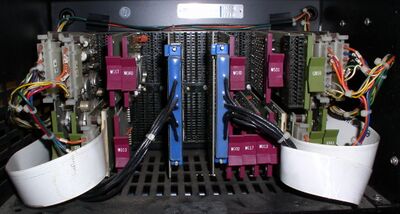 Internals of a TU56 drive