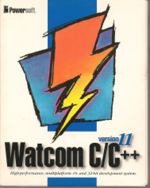 The Watcom C language and compiler was really popular in the early 1990's because of its optimizations for the Pentium CPU, along with its ability to target MS-DOS, Windows 3.1, OS/2 in both 16bit and 32bit flavors. Watcom C also added the ability to target Novell Netware. Watcom C includes both register & stack calling compilers, which depending on the targeted CPU can yield better results.

You can find more information about Watcom on the OpenWatcom project page.

I'm pretty sure this version was for sale as a 16bit compiler. I've never seen it in the wild though.

I've been able to find some information on Dr. Dobbs magazine, detailing how version 7.0 introduced a 386 32bit specific version with support of Phar Lap's 386|DOS-Extender and Eclipse Computer Solutions' OS/386 extenders. Novell Netware 386 (which later became Netware 3) was also based on Watcom 7. 7.0 also relied on the extender's linker.

By default doesn't include SDK components for OS/2 or Novel Netware.

This updated the Windows NT support up to 3.5, and Windows 95 levels.

Watcom sold all the compiler technology to Sybase where it languished, then it was swept up by Powersoft. It was then open sourced, and is free to all including its FORTRAN.

The current version is 1.9

In the past year a fork, or OpenWatcom v2 has come to being. The current version is 2.0c which features hosting on Win64, and Linux.

This article is not as complete coverage of the topic as it could be. You can help by expanding it.
Retrieved from "https://gunkies.org/w/index.php?title=Watcom_C&oldid=20115"
Category: