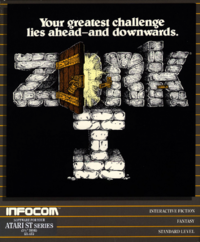 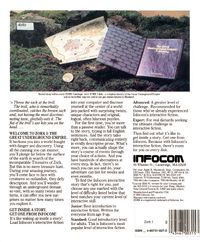 Back of Zork 1's box

"Zork I beckons you into a world fraught with danger and discovery. Using all the cunning you can muster, you'll plunge far below the surface of the earth in search of the incomparable Treasures of Zork. But this is no mere treasure hunt. During your amazing journey you'll come face to face with creatures so outlandish they defy description. And you'll wander through an underground domain so vast, with so many twists and turns, it can offer you new surprises no matter how many times you explore it."

Zork I, is the first in the original Zork trilogy. It is a version of Dungeon that was cut into three to fit to run on the popular 8bit microcomputers of the day. Zork, and the other infocom games utlized the ZIL virtual machine to run on all computers of the era. Being the oldest, there have been an incredible amount of versions of zork 1.

The earliest release of Zork I (release 5, no serial number) would become very confused if you nested objects too deeply in your inventory, such as putting the lunch in the sack, then the sack in the coffin. The output of the "INVENTORY" command would get spurious "Such language in a high-class establishment like this!" messages, with other random junk interspersed in it. This would also lead to the object hierarchy getting screwed up, in such a way that an "INVENTORY" would claim that you were carrying a bunch of rooms around. In version 5, commands such as GO DOOR or GO TREE can send players into random locations. [NZT] In version 5, the command "HIT MIRROR WITH SWORD" will generate combat responses, such as "The mirror parries", or "The mirror dies in a cloud of sinister black fog." -- Graeme Cree In version 5, the command "GIVE AXE TO TROLL" will generate a response like:

In version 5, if you give the troll to himself, he eats himself and disappears (though he still bars you from leaving the room). -- Graeme Cree In version 5, if you give the troll to the thief, the thief puts the troll in his bag, but the troll still blocks the exits. If the thief is killed, the troll reappears. -- Graeme Cree In all versions after Version 5, if you try to use a compass direction while in the boat, the game will tell you that you can't go that way in a magic boat. In Version 5, it will tell you that you can't go that way in a tan label. -- Graeme Cree In all versions after Version 5, when you reach the portion of the river where the buoy is, the description will tell you that the buoy is "(outside the magic boat)". Version 5, tells you that the buoy is "(in the room)"! -- Graeme Cree If you try to GET OUT OF THE BOAT while floating down the river, all version of the game tell you that you realize "just in time" that such a course would be suicidal. In all versions after Version 5, the game prevents you from leaving the boat. In Version 5, it lets you leave and kills you, despite having told you that you had realized not to do it. -- Graeme Cree In versions 5 and 15, shaking an open container that isn't empty may crash the game. This works with the sack, but not the bottle. [NZT] In versions 5, 15, 23, 25, 26, and 28, you can bump your head on things such as the river by trying to enter them. [NZT] If you knock the thief unconscious and try to take his stiletto, the game says that it is "white hot", and that you drop it -- obviously some sort of protective magic. However, in versions 5, 15, 23, 25, 26, 28, 30, and 75, if you try to "PUT STILETTO IN SACK" (for example) it will let you, but when the thief wakes up, he continues to attack you with the stiletto, even if you have moved it to a different room! In later versions, it refuses to let you put it in the sack at all, saying that you don't have the stiletto. -- B.J. Parker Here's a variation on the Starcross disk bug. If the sack and the bottle are both empty, it's possible to put the sack in the bottle, then put the bottle in the sack, causing both to vanish. This exists in all versions except the Solid Gold.

Here's a minor glitch that appears in all versions except the Solid Gold. Go to the temple, and enter the following commands. SOUTH, BLOW OUT CANDLES, NORTH, SOUTH. The description will say "On the two ends of the altar are burning candles.", when in fact they are no longer burning. -- Graeme Cree Another container bug, but this one is in all versions, even the Solid Gold edition. If you put the (inflated) raft in the coffin, then the coffin in the raft, both will disappear. This does not work the other way around, however. If you put the coffin in the raft first, then the raft in the coffin, you get a message saying that there is no room.-- Graeme Cree

This is the only Infocom game I know of that is in a non English language.