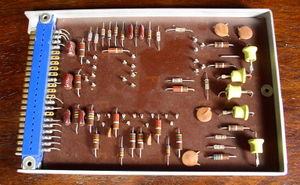 A System Module used in a PDP-6; this example has had its transistors salvaged from it

System Modules (originally named System Building Blocks; the name was changed about 1961) were a DEC modular digital logic family which preceded the later FLIP CHIPs. They were used to construct all DEC's computers from the PDP-1 through the PDP-7 (which also used FLIP CHIPs).

They connected to the units they were plugged into via a set of 22 gold-plated discrete pins along one edge. They used transistor inverter circuits, with the transistors operating saturated, to avoid dependence on tight tolerances; they ran off -3V. Intended for prototyping as well as production, they included design features intended to avoid damage. They came with design advice which included loading rules, and wiring instructions.

They were available in three compatible speed lines:

Larger assemblies which were part of the same family provided core memory testing devices, and there were also power supplies, mounting panels with slots for the modules, cabinets to hold groups of mounting panels,indicator light panels, etc, etc.