FLIP CHIP was DEC's trade name (a registered trademark for DEC) for a lengthy series of DEC's small cards used to build computers, and peripherals for them. They were a successor to DEC's earlier System Modules; they were introduced as a replacement largely as a cost-reduction measure (ironic, since their eventual demise was also due to cost-reduction).

Early FLIP CHIP modules were single-height, normal-length modules, approximately 4 inches long and 2.5 inches wide. These had 18 contact fingers on one side of the PCB only (the so-called 'solder' side); the contact pads were 'numbered' from the DEC Alphabet. A FLIP CHIP plugged directly into a 144-pin connector block backplane with wire-wrap pins on the back side; automatic Gardner-Denver wire-wrapping equipment could wire the connector blocks to produce larger functional (sub)-systems.

The earliest FLIP CHIPs, introduced on August 24, 1964, used discrete transistors and diodes; they performed generic, simple logic functions, similar to an integrated circuit. FLIP CHIPs incorporating IC technology eventually followed, and the limited number of contact pins eventually became a problem, so that contact fingers were added on the other ('component') side as well, for a total of 36 connectors, 18 on each side.

FLIP CHIPs were used in the DEC PDP-7 (referred to in its documentation as the "FLIP CHIP"), PDP-8, PDP-9 and PDP-10. DEC continued to use the name up into the period when extended-length quad-height cards started to appear, e.g. in the KA11 CPU. However, although these special-purpose cards are labelled 'FLIP CHIP's, they are generally not considered to be 'true' FLIP CHIPS; the name is generally only used to refer to the smaller, general-purpose cards.

The small, general-purpose FLIP CHIPs made sense when they were first introduced (in the transistor era), since they allowed designers to operate at a higher conceptual level (gates, etc). In the IC era, those became the design elements, and it also became desirable, for cost reasons, to decrease the amount of connectors used in a (sub)-system, so the larger cards became the preferred direction. 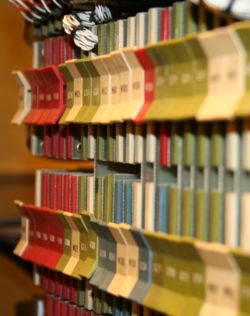 The B stands for 'Blue'; they were effectively the same as the 6000 Series System Modules, but re-packaged into FLIP CHIP form. First used on the PDP-7, and later in the famous KA10 PDP-10 CPU; they used silicon transistors, and were used for the main logic in the higher-end CPUs.

The G stands for 'Green' (the handles are an olive green, not a forest green, though). The G series were specialized modules that are part of a specific larger (sub)-system (e.g. core memory drivers).

The M stands for 'Magenta' (a purple colour). When first introduced, they carried the then-new TTL chips; they were first used in the PDP-8/I. Later on, they became quite complex (see list of DEC part numbers). They replaced the R and S series.

The first FLIP CHIP family; R stands for 'Red'. They used discrete transistors; intended to be easy to use, they used diode gates and diode-capacitor-diode circuits. They were slower logic than the B series, but cheaper. They were used extensively in the I/O circuitry of computers.

The S series (also with red handles) is identical to the R series, except that its transistors switched faster, and it also used lower resistance resistors, allowing more cards to be wired in series, and also operate somewhat faster. First developed for the original PDP-8.