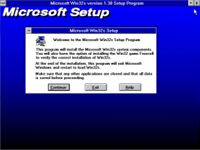 Win32s was an addon developed by Microsoft to allow people to quickly start writing Win32 programs. At the time the big problem was that all of the Windows users were using Windows 3.1 and at the time there was no shipping 'production' version of Windows NT, and there was no 'consumer' Win32 operating system at the time.

Win32s includes a device driver to setup a 32bit memory space on Windows 3.1, then takes specially formatted Win32 COFF exe's that can be relocated in memory (On Windows NT, all exe's get loaded at the same address space, each application gets it's own 2GB memory area) as in Win32s they all have to share a memory space. Then as many as possible Win32 calls are then thunked into the appropriate Win16 calls.

Many Web browsers of the time required Win32s for the memory, however Win32s did not include things like threads, memory protection, long file names, it was just a stepping stone to Windows 95.

Visual C++ 1.0 & 2.0 32 bit editions shipped with Win32s, and a command line only environment for building Win32 applications. Watcom C however did let people use a full GUI & debugger for Win32s.

The first version I can find is included in the October 1992 Windows NT Beta. 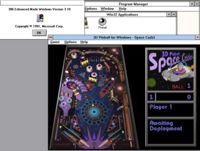 The last version can be downloaded here. The later versions of Win32s included OLE 2.0 updates that would bring this 32bit environment in step with Windows NT 3.5 and break away from Windows NT 3.1.

Win32s was remembered by a lot of users for adding the new card game Freecell.

Here is a list of programs that are compatible with Win32s http://stephan.win31.de/w32slist.htm

One of the most notable programs to run on Win32s was Mosaic. Another popular program for people to run later on was pinball from the Windows NT 4.0 Beta/production disks.

This article is not as complete coverage of the topic as it could be. You can help by expanding it.
Retrieved from "http://gunkies.org/w/index.php?title=Win32s&oldid=20454"
Category: