Difference between revisions of "Coherent" 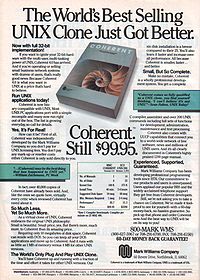 Coherent was somewhat famous for being audited by Bell Labs and was vetted to be free of AT&T code. Despite its low price it failed to achieve any significant market share.

Coherent has been recently open sourceed, under a 3-clause BSD license.

More information about the source code to Coherent can be found at www.nesssoftware.com.

Getting it to run

Right now the easiest way is to use Qemu. I've found that a memory size of 8MB is the best, as I had several issues with 12MB. The fsck of a large disk during boot does take a long time, so you need to be patient or use a small disk.