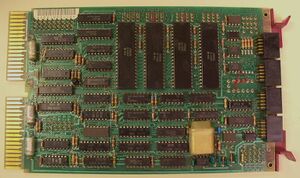 There are several options for cabling to the DLV11-J. One is to run individual cables, such as the BC20N-xx (Berg 10-pin connector, to female DB-25S wired as a DCE - i.e. including a null modem) to each line's Berg connector. The alternative approach is that DEC produced a number of distribution panels which can be used with the DLV11-J; all have a flat cable which splits into four sub-cables, each with a Berg 10-pin connector which plugs into one of the Berg headers on the DLV11-J.

One is the D315; it has four male DB-25P connectors, i.e. wired as a DTE. It comes in two variants: in both, the flat cable is soldered directly to a PCB: in one, that contains the final DB-25P connectors; in the other, they are mounted in a subsidiary plate, and each one has a built-in static filter. Another 4-port distribution panel, DEC part number 70-19964-01 (used with the DZV11), has a Berg 40-pin header; a flat cable with 4 Berg 10-pin connectors plugs into that. It can be identified by the DEC part number on the PCB it uses; 50-15220-01 (the part number for the complete assembly is 54-15221).