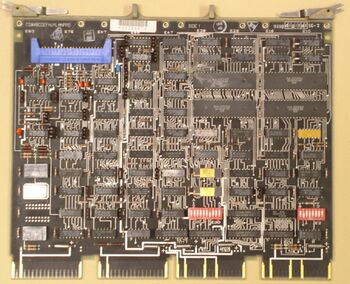 The DZV11 was a QBUS four port asynchronous serial line mux card for DEC computers; the QBUS equivalent of the UNIBUS DZ11 (with which it is program compatible). Like the original, it used used programmed I/O, and thus could present a considerable load on the CPU when running a high speed line.

A 64-entry FIFO buffer silo was provided on the input side. The DZV11 could operate with full-duplex modems. It provided program-set baud rates (up to 9600 baud), but not split speed. Break could be detected or generated on each line.

Physically, it was a quad card, the M7957; a cable plugged into a 40-pin Berg connector header on the card led the lines out of the computer. The pin assignments in the Berg header are mirrored, so that if the mating Berg connector is plugged in backwards, the only result is to invert the line numbering.

Initially, a special BC11U-25 cable was used; it consisted of 4 separate round cables, from a Berg connector, to individual DB25 male connectors (DB-25P) wired as DTEs.

The DZV11 uses the DEC LSI-11 Bus interface chips; the DZV11 technical manual (below) includes detailed descriptions of all of them in Appendix A, 'IC Descriptions' - along with a detailed description of the UART chip, used across essentially all DEC asynchronous serial line cards of this generation.