Difference between revisions of "Microsoft Fortran" 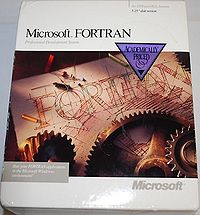 Microsoft Fortran has been around for a LONG time.... However before it was sold, the product name was changed to PowerStation FORTRAN, then later sold to DEC at some point, then merged with Compaq, sold to Intel around the time of the HP merger.

But as far as I can trace back, it started as a product for CP/M.

I 'found' version 3.4 available here, although it's possible someone else has an older version.

From the CP/M versions, FORTRAN like all of the rest of Microsoft's languages found their way to the 16 bit IBM PC. From my own usage, popular versions included:

This article is a stub. You can help by expanding it.
Retrieved from "https://gunkies.org/w/index.php?title=Microsoft_Fortran&oldid=10122"
Category: