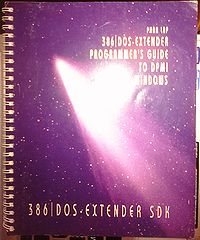 The 386|Dos-Extender was the first real MS-DOS extender created by Phar Lap.

By using special compilers Watcom C 386, and HighC 386 you could create a 32-bit program that would run on an unmodified MS-DOS system equipped with a 386 CPU. It was significantly easier to deploy 386 extended applications, however it did carry a significant price tag, compared to deploying OS/2 2.0, although it was much more simpler.

This article is a stub. You can help by expanding it.
Retrieved from "https://gunkies.org/w/index.php?title=386_DOS-Extender&oldid=20457"
Category: