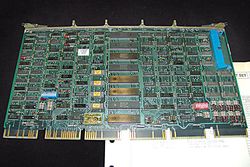 The DZ11 was a UNIBUS 8 port asynchronous serial line mux card for DEC computers. It used programmed I/O, and thus could present a considerable load on the CPU when running a high speed line, using interrupts. A 64-entry FIFO buffer silo was provided on the input side.

Both EIA and 20mA physical layers were supported; the EIA model could operate with full-duplex modems. It provided program-set baud rates (up to 9600 baud), but not split speed. Break could be detected or generated on each line.

Physically, it was a hex card, which plugged into an SPC backplane slot. The EIA version was the M7819, and the 20mA one was the M7814.

Accessories for the M7819 EIA version are:

The later H3006 distribution panel for the EIA version was part of DEC's modular back-panel system.