The HSC50 Hierarchical Storage Controller (alternatively called the HSC50 Mass-Storage Controller and HSC50 Mass Storage Server in DEC's documentation) is an intelligent mass storage sub-system server. It communicates over the Computer Interconnect (CI), and is housed in a single cabinet.

In utilizing the CI, the HSC50 interfaces one or more host computer systems via the SC008 Star Coupler (a passive, RF-transformer coupling network) to a set of mass storage devices. If the device is a disk drive, the HSC50 communicates over the Standard Disk Interconnect (SDI) bus; if it is a magnetic tape formatter, the Standard Tape Interconnect (STI) bus is used.

The HSC50 can support a total of six disk and/or tape data channels. Each one of these data channels accommodates four cabling bulkhead ports. Maximum disk configuration for a single HSC50 is 24 drives. The maximum number of tape drives in each HSC50 subsystem is found in the relevant HSC50 release notes.

Mass Storage Control Protocol (MSCP) is a communication protocol used over the CI between a host system and the HSC50. This protocol enables a single class driver to replace multiple device-specific drivers. Separate but similar protocols exist for disk and tape communication:

The HSC50 is a high-speed, reliable, high-availability controller of mass-storage devices. This release supports its use in controlling RA60, RA80, and RA81 disks, and its use with VAX-11/780 and VAX-11/782 systems. The HSC50 communicates with VAX-11/780 and VAX-11/782 systems by means of the CI780, which is described in the VAX/VMS CI780 Software Release Notes and the VAX/VMS Version 3.1 Release Notes.

The HSC50 is a controller that, like the UDA50, implements the Digital Storage Architecture (DSA).

The HSC50, in implementing DSA, controls the physical disk unit. VAX/VMS processes request virtual or logical I/O on disks controlled by the HSC50. The disk-class driver and the HSC50 cooperate to provide what appears to the requesting process as a range of contiguous, good, logical blocks.

The HSC50 corrects bad blocks on the disk without the intervention of VAX/VMS by revectoring the file's logical block to another, good physical block on the disk. The VAX/VMS system, which does logical or virtual I/0 to such a disk, is never burdened by bad block correction for disks attached to an HSC50.

With certain restrictions, the HSC50 allows two or more processors to access files on the same disk. In addition, the HSC50 allows you to add disks to your configuration, or remove them, without rebooting your systems. 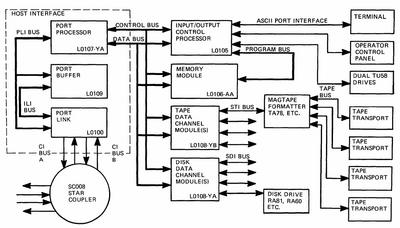 Up to seven types of modules are contained in the HSC50; module names, module numbers (stamped on the module handle), and the function of each module is:

Following are the HSC50 maintainability features:

Base Unit and Options