This is a small guide to installing Windows NT 3.51 on qemu. 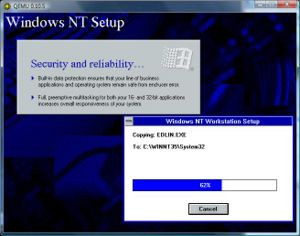 The NT 3.51 install is somewhat straighforward in terms of hardware.

NT 3.51 is expecting an ISA computer, and this will limit your choice of network cards to the NE2000.

The NT 3.51 CD-ROM is not bootable. You will either have to have the floppies, or do a 'network' install. I recommend using MS-DOS to mount the CD-ROM and start an install that way - see Installing MS-DOS on Qemu.

I've also had issues with a 1GB disk to install into, however I've had a 500MB disk work fine. At times the installer will pause seeming to lock but it's working... There must be some IO timeout issues at hand..

This is how I run my emulator...

With Windows NT 3.51 installed there are a few things you'll probably want...

I would recommend installing the last service pack for NT 3.51, sp5 which you can obtain here.

You can install the internet explorer for Windows 3.1 .. The last version was 5.01. You can download it from here.

Also you may want to have windows automatically log you in, use regedt32 to setup the registery as mentioned here.

This information comes from http://toastytech.com/guis/misc4.html