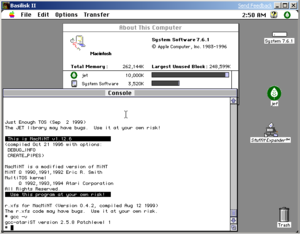 MINT back in the day for Atari ST’s was a UNIX-like layer that ran on top of TOS (The Atari MS-DOS like OS) and provided basic Unix services. With the program aptly called JET (Just Enough TOS), the Macintosh 68000’s can setup a TOS compatible interrupt vector table, and run TOS procedure emulation to run the MINT binaries under MacOS!

Sort of. Consider it an "Operating Environment", much like what Windows 3.1 was to MS-DOS.

First you need to disable virtual memory… That’s bad. Next it doesn’t support TCP/IP so it’s like being on Unix v6. But it’s fun at any rate.

You can find the binaries here:

It includes gcc 2.5.8, and a somewhat basic environment. It does have lots of potential, but the biggest gripe is that it will crash with virtual memory enabled. Also since it is 68000 based programs it is running under emulation on the PowerMAC computers. It will run on various 68k emulated MAC's namely Basilisk II.

I've even managed to port Zork to Mint via f2c. It was pretty straight forward... You can download it here.

This article is not as complete coverage of the topic as it could be. You can help by expanding it.
Retrieved from "https://gunkies.org/w/index.php?title=MacMiNT&oldid=20459"
Categories: