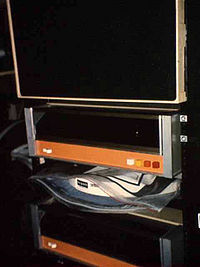 The RK02 and RK03 were moving-head removable-pack magnetic storage disk drives, sold by DEC, but designed and manufactured by Diablo Systems. They were inspired by the IBM 2315 drive and pack.

The pack contained a platter 14 inches in diameter, coated with iron oxide. Since the disk was hard sectored, platters used in the PDP-8 were physically incompatible with those used in the PDP-11, although the drives themselves were completely identical for both.

They were replaced by the DEC-manufactured RK05, which used the same packs.