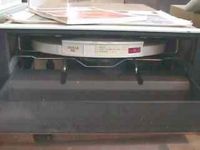 An RK05 with the door open, showing the removable pack (white plastic)

The RK05 was moving-head magnetic storage disk drive, most versions of which used removable packs. They were designed and manufactured by DEC, and were based on, but not completely compatible with, the earlier RK02 and RK03 drives (which were sold by DEC, but not manufactured by them), which in turn were inspired by the IBM 2315 drive and pack.

The pack contained a platter 14 inches in diameter, coated with iron oxide. Since the disk was hard sectored (using narrow slots cut through a projecting cylindrical ring in the hub, with its axis parallel to the platter's rotational axis), packs used in the PDP-8 were physically incompatible with those used in the PDP-11, although the drives themselves were completely identical for both. 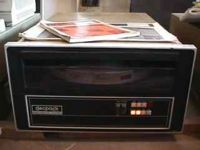 An RK05 with a cartridge loaded 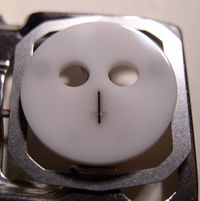 The mounting slide DEC used was the General Devices 'Chassis Trak' C-230-S-122 (22"), which are still available (e.g. from Newark). They're somewhat pricey - the -124 (24") is sometimes slightly cheaper, and can easily be modified to fit an H960 rack, by drilling two extra holes.

It is now common to find RK05 drives which are missing their prefilter frame (which holds on the prefilter over the air inlet to the logic assembly area), since it has to be removed to remove the signal cable to the drive, and it's often not replaced afterwards.

For those who wish to fabricate replacements, here are images (from the top, shown to the right, and from the bottom, available here, and measurements.

The overall size is 21.65cm by 13.05cm; the height is 1.05cm. The side/end members are 1.35cm wide; the material is 2.3mm thick (but this includes a rather thick paint coat). The cutout in one side (for the drive signal cable) is 12.0cm by 0.50cm. The hexagonal mesh is 1mm thick, and repeats on a 7mm pattern. The external radius where the side members bend over appears to be about 2.4mm (it's a bit difficult to measure exactly because of the thick, soft paint coating).