Technology Square (usually shortened to Tech Sq) was the nickname for MIT building NE43 which housed Project MAC, which later split into the AI Lab and the Laboratory for Computer Science (including the Dynamic Modeling, Mathlab, and Macsyma Consortium groups). The machine room was on the top (9th) floor. 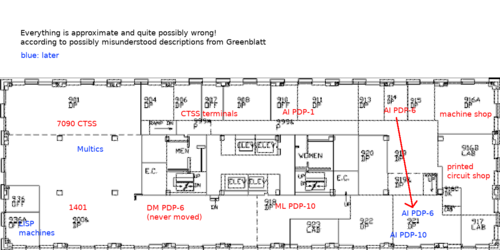 Later on, space around the outer walls where CTSS/Multics machines used to be was turned into enclosed offices; the remainder of that space was uses to hold the MIT-MC KL10 ITS machine.

(A ping-pong table was behind MC, between it and the outer wall at the end of the building; this was later dispensed with, so the space could be used to hold the CSR group's PDP-11/40. Later the /40's CPU was swapped to EECS - they wanted it for a second front end on the EECS DECSYSTEM-20, which was named 'DeepThought', if memory serves - for a PDP-11/45, which had been the EECS DELPHI machine, on which quite a few years of CS undergrads learned to program. Sic transit gloria mundi.)

The ARPANET IMPs were along the outer sidewall where it says '1401'.

As the other end, the offices 919-922 were done away with, and that all became open raised floor, initally holding various robot arms, the Xerox Graphics Printer, etc, etc; later CADR LISP machines were there (and elsewhere). The AI ITS KA10 was later replaced with the MIT-OZ TOPS-20 DECSYSTEM-20.

This article is not as complete coverage of the topic as it could be. You can help by expanding it.
Retrieved from "https://gunkies.org/w/index.php?title=Technology_Square&oldid=25230"
Category: