Difference between revisions of "DECtape" 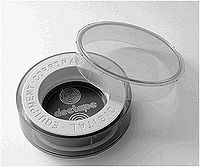 It used 3/4-inch wide magnetic tape on small 4-inch reels, formatted before use into fixed-sized blocks which could be individually read or written. This differs from conventional magnetic tape, which could only be written at the end of the previously-written area of the tape.

DECtape was random access, so the drive had the ability to move forward and backwards to the desired block. The tape format included a block number at the start and end of each block, to help the drive find the desired block. Tapes could be read and written while moving in either direction, which meant that when seeking backwards to the target block, it was not necessary to bring the tape to a halt, and reverse it, before reading the data. Not all DECtape controllers supported reading in the reverse direction, however.

DECtape also had exceptional reliability; it used a very simple and brute-force mechanism to produce that: it wrote all tracks in duplicate on each half (in width) of the tape. It was possible to punch a hole in a DECtape with a paper punch and leave the tape readable.

The drive had a single head, and used hydro-dynamic lubrication to reduce wear on the tape; like disk heads, the tape floated on a layer of air while the tape was moving, without touching any metal. (In a test, a tape made 30,000 passes over a head without significant wear.)

DEC produced two DECtape drives; the single TU55 DECtape Transport, and the dual TU56 DECtape Transport. Controllers for them existed for the PDP-7, PDP-8, PDP-9, PDP-10, PDP-11 and PDP-15, among others. The older Type 555 Dual Microtape Transport was used with the PDP-1, PDP-4, PDP-5, and PDP-6.

DECtape was originally called Microtape. As a pun on this, IBM 7 and 9 track magnetic tape was sometimes called Macrotape.

The block format included checksums, and guard words to protect the block numbers, along with an inter-block zone. The tape format included end zones and extension areas on each end of the tape; the former was to prevent the tape running off the reels, and the latter to allow reel acceleration before reading/writing starts.